Cabo de Gata-Nijar is a huge natural park in the east of the province of Almería in the region of Andalusia. The vast area consists mainly of rock formations, pristine beaches, salt lakes, deep cliffs and beautiful villages. Are you traveling to the south of Spain soon and want to discover some of the most beautiful places, villages and beaches of Andalusia? In this article you can read all about the most beautiful sights in Cabo de Gata.

Index:The most beautiful beaches, spots and villages of Cabo de Gata in Andalusia

During a tour of Andalusia, many people choose to explore the west of the region. A pity, because also in the east you can find beautiful areas. Natural park Cabo de Gata for example, borders the lovely city of Almería and the only real desert of Europe, the Tabernas desert. The Almería region is not seen by everyone as beautiful and even has the nickname ‘Costa del Plástico’ because of the thousands of plastic greenhouses in which fruit and vegetables are grown. The working conditions seem to be quite harrowing and especially the pollution gives you food for thought. Not a pleasant sight when driving through the Costa de Almería. But fortunately Cabo de Gata – and the rest of the province – is more than that.

In 1997, the entire Cabo de Gata Natural Park was declared a UNESCO Biosphere Reserve. With an area of over 45000 hectares, this makes it the largest protected coastal area in Andalusia.

Below you will find information about the most beautiful villages, places and beaches of Cabo de Gata in Andalusia. We ourselves traveled from north to south through the region, but of course it is also possible to take the route the other way around.

The white village of Mojacar

South of Mojacar, just past the beautiful beach Playa el Sombrerico you will find one of the most special places in Cabo de Gata. Torre del Pirulico was built in the eighth and ninth centuries and served primarily as a lookout for danger from the sea. Today you can climb the tower for free and enjoy the most beautiful views of the Mediterranean Sea. You can park your car near the tower, but I recommend you to take a nice walk along the coast from the parking lot at Playa del Sombrerico. Did you enjoy the beautiful view? Then walk a few meters further for a stunning rock formation you definitely want to see.

There is no shortage of beautiful beaches in Cabo de Gata. One of our favorite beaches in the natural park is Playa de los Muertos. The beach with its special name is one of the most popular beaches in the area and therefore it can get quite crowded in high season. We were there in April and even then one of the parking lots was quite full. Still, I recommend the walk down, but don’t forget to take a look at the mirador de la Playa de los Muertos.

During our visit, parking was free, but there were signs with prices for parking. So chances are that during high season it will no longer be free. Parking will then cost €4 for cars and €5 for RVs and caravans.

Is Agua Amarga just a little too neat for you and want to experience something completely different? About half an hour south of Agua Amarga you will find the hippie village of Las Negras. The atmosphere is mega relaxed, it’s bursting with cozy bars, restaurants and terraces and the views over the sea, with the colorful fishing boats make the story complete.

TIP: Looking for the best places to eat in Las Negras or do you want to have a drink? Some of the nicest bars and restaurants in Las Negras include La Chumbera, Bar La Taska and Bar Cerro Negro.

Through a beautiful walk that takes about an hour, or by boat, you can go from Las Negras to one of the most beautiful beaches of Cabo de Gata. Cala de San Pedro is not accessible by car and probably this is what makes the atmosphere so great. The atmosphere here is completely different from all the other beaches in the natural park

The former mining town of Rodalquilar

One of our biggest surprises during our trip is the former mining town of Rodalquilar. The gold mine has been closed for years now, but you can still visit the remains, which is super impressive. But the town itself is really worth a walk. Everywhere you look you see white, beautiful houses with the finest art woven throughout the city. The atmosphere is fantastic and therefore you should definitely visit Rodalquilar during your trip.

The small fishing village of La Isleta del Moro is the next stop during our route through Cabo de Gata. The views from the village are phenomenal and the bars and restaurants along the cliffs all look super cozy. The village gets its name from the small island that lies right off the coast of the village.

Playa de Mónsul is one of the most beautiful and famous beaches of Cabo de Gata, but you don’t get there by accident. On your way there, at some point the paved road stops and you have to follow a dirt road for about 4.5 kilometers. From the parking lot it is a short walk to the beautiful beach of Mónsul. Playa de Monsul is especially popular because of the‘petrified wave of Monsul‘. (the pictures speak for themselves).

The last stop in Cabo de Gata – or the first if you start your trip in Almería – is the town of Cabo de Gata. The village itself we found not so special, but the road to the lighthouse of Cabo de Gata (Faro de Cabo de Gata) is more than worth it. The route leads you along the beautiful, vast beach of Cabo de Gata and ends at the lighthouse. From here you have a fantastic view over the coastline and the spectacular reef of Arrecife de las Sirenas.

Extra tip: During our trip to Faro de Cabo de Gata we spotted a large group of flamingos in the salt lake of Las Salinas. So it’s worth keeping your eyes peeled as you drive past the salt lake.

How to get to Cabo de Gata

The nearest airport to Cabo de Gata is the airport of Almería. Flights to Almería can be found here. You can easily rent a car in Almería to make your trip through Andalusia complete. For renting a car in Spain, we recommend Rentalcars.com of Alamo. From Almería it is about a half hour drive to the first stop in the natural park

Unfortunately we could not admire all the places in Cabo de Gata that seem to be beautiful. Below are a few more places that are often mentioned as must visit places in the region.

The map below shows all the beautiful villages, places and beaches in Cabo de Gata mentioned in the article.

More Spain:
Check out all our Spain articles 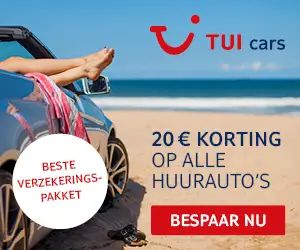